The Chronicle reported on Mayor Newsom’s idea to turn a good portion of the Embarcadero into a pedestrian-only safe zone during certain times of the weekend. This is similar to the City’s current closing of JFK Drive in Golden Gate Park to vehicular traffic on weekends.

Is this a good idea? Yes, in spirit, but no in practice.

In practice, giving up the entire Embarcadero to pedestrian use at anytime is silly. The Embarcadero already has a beautiful and expansive pedestrian sidewalk on both sides. And, the bay side of the Embarcadero is unencumbered by vehicle cross traffic, making it a fully continuous pedestrian right of way from AT&T ballpark all the way up to Fisherman’s Wharf (and even beyond to the Marina).

Furthermore, the Embarcadero on weekends is a heavily used thoroughfare connecting downtown and the Fisherman’s Wharf to the three major interstates: 101, 280 and 80. Severing this connection on weekends would make it very difficult for visitors to come to our City. I’m all for congestion pricing to control use of personal vehicles, but giving up a prime vehicle thoroughfare for questionable pedestrian need is silly. Visitors bring essential revenue to the backbone of our City’s economy: tourism.

Instead, we should give up other City streets to pedestrian use — permanently.

The City’s ‘default’ practice is to pave with cement over all City territory between private real estate holdings, regardless of actual demand for that cement by personal vehicles. Embarcadero cement has an extremely high demand for vehicle use. But, out in the deep Sunset, Parkside and Richmond districts there is no need for vehicle thoroughfares at every avenue.

These cement roads are, in effect, parking lots. Vast acres of public land in which we live is dedicated to grey car storage. What if we could accommodate vehicle storage, the low demand for vehicle thoroughfares, AND add pedestrian friendly green space? I think we can.

Check out this typical Sunset street:

Here’s a better idea: we could convert every third avenue into a linear park. Yes, you lose parking for each third avenue’s park conversion, but you can gain it back by increasing parking density along the other two avenues by converting them into one way with perpendicular or slanted parking instead of existing parallel parking.

Here’s an overhead view of a slice of the existing 24th Avenue: 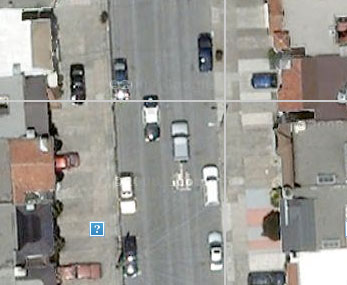 If 24th Avenue was converted to a linear park, 25th and 23rd Avenues would be converted to north and south bound one-way streets respectively. Parking density could be increased to account for lost street parking on 24th Avenue, like this: 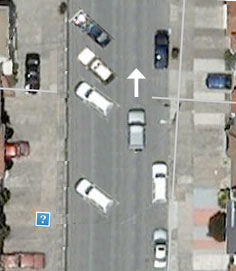 Or, instead you could close off the 24th Avenue “linear park” to through traffic, but still allow parking and access to existing vehicle garages. You can cover the entire 24th Avenue with grass and trees, and pave a smaller space with “grassblocks“, concrete with over 50% of surface as holes for dirt to hold real grass, to allow for local access and limited on-street parking while maintaining a real grass surface.

Expanding on this, you could make the linear parks have beautiful bike corridors. Integrating dedicated bike corridors would provide much needed safe, sole-priority biking space.

(Vehicles are stationary, through traffic would be prohibited and made annoying by bumpy grass concrete.)

This would be very applicable for other City neighborhoods. The Mission comes to mind first: the large area between Mission and Potrero, 16th and Cesar Chavez (Army) is especially starved for green space.

Imagine the effect this would have on quality of life! For many residents, you could step out your door right into a park. For the rest, you could go at most 1.5 blocks to find a large park.

I imagine your response now, dear reader, “This guy is full of crap. Sure, we all would love a park right in front of our house, but this would never work.” NO! WRONG!

Too many people think this way. They see our City as a dead, unmovable structure. They see personal vehicle priority on our roadways as an absolute GIVEN, and not a CHOICE. The final product is to recreate paradise in our own City. It can be done, it just requires a bit of imagination and some balls to make it happen. These are our streets, let’s take them back.

PS: Related, here are some cool sites about “Parking Day”, converting parking spaces into parks for a day:

1 Response to Mayor Newsom’s crazy ‘take back the streets’ idea is well founded but slightly misguided.