How much is a San Francisco taxi medallion worth? 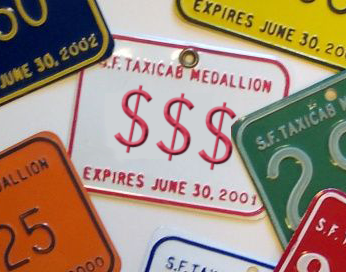 The Goldman School of Public Policy at UC Berkeley prepared an analysis of the City’s taxi medallion scheme in 2006.

Read it if you have a spare hour or so and if you enjoy these sorts of things. Here’s a summary if you want to keep your hour: the authors recommend switching to a transferable medallion scheme similar to New York City, allowing for sale and resale of driving medallions. Currently, San Francisco issues approximately 1,500 medallions to full-time drivers that have waited for 10+ years on a waiting list. (Basic primer: a cab must have a medallion to legally operate as a taxi in the City.) Drivers with medallions then lease back these medallions to cab companies who, in turn, lease the medallion and a car to shift drivers (like me).

Medallion holders must be able to safely drive 800 hours per year. As soon as he or she can no longer drive, the driver must forfeit the medallion back to the City at which time it is offered to the next driver on the list.

Whether or not San Francisco needs transferable medallions is a valid but complicated debate to be taken up elsewhere. (UPDATE 4/24/08: “elsewhere” is now apparently in the comments below.) I pose this question instead: if we had transferable medallions, how much would they be worth? Or, looking at it another way, how much are the collective medallion assets worth to the City taxpayers?

A medallion provides a steady, predictable revenue stream. I’ve heard drivers claim that a medallion can bring in between $1,500 and $2,000 per month for the medallion owner.

The waiting list is long, so many drivers don’t get a medallion until age 40 or older. Let’s be conservative and say they only drive until age 60.

So, a medallion’s value to an individual would be 20 years of a steady stream of $1,500 per month ($18,000 per year) payments. Way back in finance class we learned how to calculate Net Present Value. I don’t remember how to do this, but this website can calculate it automatically. This sketchy website recommends using a discount rate of 6%. Please let me know if you have a better idea of what discount rate to use and why.

Whatever you may think of transferable vs. permitted medallions schemes, this quick napkin math analysis shows the City is practically giving away a $300 million asset for free.

PS. Of course, I welcome revisions to my math so we can get the best estimate possible. It’s been a long time since finance class.

UPDATE: I’ve heard that some cab companies pay upwards of $2,000 per month.

17 Responses to How much is a San Francisco taxi medallion worth?