You exchanged presents and illuminated an evergreen to celebrate the Lord’s birth. I drove a cab. 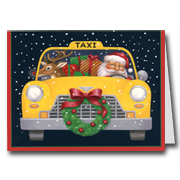 I work Sunday, Monday and Tuesday. There is no such thing as paid holidays when you’re an independent contractor driving a cab. In fact, it’s more difficult to get time off during the holidays since nobody else wants to take those undesirable shifts.