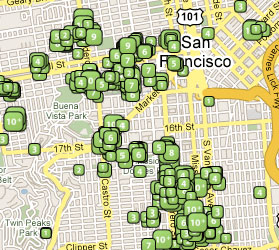 First, a nicely written commentary on Wired suggests that you should unlock your wireless router! It’s not as crazy as it sounds.

Second, a well funded startup called Meraki claims it will create a free wireless network across San Francisco. A bit of digging reveals that Meraki manufactures inexpensive mesh networking devices. They usually charge for the devices, about 50 bucks each.

This time they’re giving them away for free in San Francisco if you live in an area where they need additional mesh coverage. All you have to do it plug it in or put it on your roof (it evidently works with solar power).

But here’s what I don’t understand:

Here’s the answer to question 2. It looks like Meraki will monetize this free Internet access with a toolbar:

Hmm, I wonder how people will like that. I guess they’ll deal if it’s free.