Why is Congress wasting its time (aka our money) with baseball players? 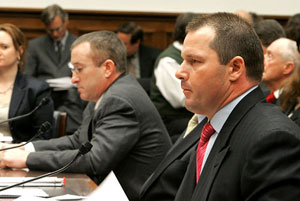 I’ll admit right up front: I’m not sure what Congress actually does at their meetings in Washington. But, what I glean from an ear half-tuned to NPR is that it’s usually a discussion on legislation germane to American citizen’s lives and within the general jurisdiction of the legislative branch of our government.

So then why are our elected officials spending so much time on the allegations of steroid use of baseball players?

Last I checked, the Major League Baseball monopoly is a privately held corporation. Despite local decisions to support the construction of stadiums through significant public tax breaks and subsidies, MLB remains a large, arguably well-run, private corporation which often handles tough internal human resources issues such as substance abuse, as would any other large corporation with stringent performance contracts and important PR considerations.

So, I’ll return to my original question. Why are our elected officials spending so much time and effort on this issue?

As a lowly taxpayer and voter, I would rather our elected officials spend time and effort providing universal healthcare so that I can see the dentist without saving up for weeks on end or ending up in bankruptcy if, God forbid, I had cancer. Or, maybe they can work to reduce government spending so that the value of the dollars I earn doesn’t continue to endlessly nosedive. Or, maybe they can cut our losses in Iraq or tighten an unaccountable defense department that has a difficult time tracking its own purchases.

I guess all those public needs must wait until our elected public officials have fully dissected the internal HR substance abuse crisis of a privately held company. Gosh, how silly of me to even think this wasn’t mucho importante issue #1 for the American people.

1 Response to Why is Congress wasting its time (aka our money) with baseball players?