Website highlights financial stress of driving a taxi in the City 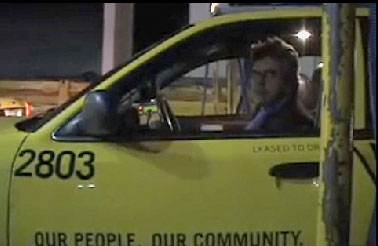 The video clips thumbnailed along the bottom are accurate and colorful paintings of a typical taxi shift. Well worth a view.

Since I drive a cab in the City and can’t shut up about local politics, I have some pointed reactions:

I don’t know who Heidi Machen is or how she got to be Executive Director of the SF Taxi Commission, but she doesn’t seem to have an accurate grasp of the industry over which she regulates. This is a bit scary.

When asked about the recent gate-fee increase, Ms. Machen responds with a bubbly response. “In many ways it’s very positive,” she starts, repeating again for emphasis, “in many ways it’s very positive, because, if indeed the taxi companies needed money to purchase the alternative fuel and hybrid vehicles San Francisco is looking at a clean taxi fleet in 3-4 years. Wow! That’s phenomenal!”

“If indeed?” If indeed? Ms. Machen, your job, for which you are paid a bulbous salary of some sort, is to be Executive Director of the Taxi Commission. There should be no “if” in your response. You should know whether or not taxi companies need money to purchase alternative fuel and hybrid vehicles BEFORE implementing fee increases.

Continuing, “On the other hand you look at the controller’s report and the controller said this would have an immediate detrimental effect on taxi drivers’ incomes. So, that can be a negative, obviously, because taxi drivers, a lot of them, may be hanging on marginally. On the other hand, maybe it encourages taxi drivers to become more efficient. Some would fear it would make taxi drivers more reckless.” Ponderously she summarizes, “I think there are some positives and some possible negatives that we’re looking at.”

My fear is she doesn’t seem to “get it.” A key sticking point: taxi companies need CPI gate increases but drivers also need correlated revenue increases. The discussion of green cabs is a sideshow distracting from this core issue.

On the other hand, Mr. Gillespie in his role as General Manager of Yellow Cab understands the situation perfectly. Unfortunately, his role is not an advocate for drivers but instead for revenue maximization for Yellow Cab. (This is not a judgment of his motivation, just a recognition thereof.) But, at least he “gets it.”

Thomas George-Williams, an active member of the local United Taxi Worker union “gets it” too. But, as most drivers are not members of the Union, its influence, regardless of Mr. George-Williams “getting it,” is unfortunately questionable.